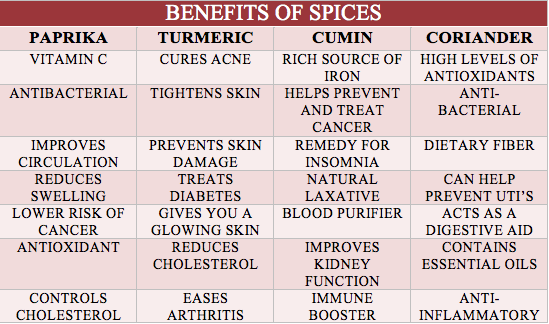 Secrets of a Spice Girl by Mareesa Ahmad

I remember the exact moment when I fell in love with spices. I was sitting on the kitchen countertop in my pink Dora the Explorer nightgown as I watched my mother cook. I helped her scoop flour onto the cold, granite surface and made a small well in the center of the flour mound. She expertly cracked an egg with one hand; I tried to do the same, but the egg shells fell into the mixture. My mother patiently picked out the shells and said, “you’ll get it next time” in fluent Bengali. I nodded my head sagely.

I used my small hands to mix the flour and egg together as if I were kneading play-dough. I mashed the boiled potatoes with a plastic masher and watched the potato ooze out of the small holes. My mother opened her magic cupboard of spices and carefully selected a few to add to the potato mixture. We added paprika to regulate blood pressure, turmeric to improve our joints and increase the glow in our skin, cumin to promote a healthy metabolism, and coriander to ease digestive discomfort. After adding these four potent spices with numerous health benefits, we shaped the dough into small balls and rolled them flat with the rolling pin. My mother scooped a heaping spoonful of potato mash and plopped it directly in the middle of the flattened dough and gently lifted the corners to seal it. I helped her roll the ball into a flat bread stuffed with the savory potato mixture. She tossed it in a heated cast-iron pan until it was golden-brown and crisp. Beaming with pride, my mother placed it in front of me. I blew on it gently, closed my eyes, and took my first bite of the potato stuffed flatbread. The flaky and crispy exterior gave way to a soft, spicy interior. I could taste the earthy, nutty flavor of the cumin on my tongue. I felt like there was an explosion of flavor in my mouth. I was smitten forever. Mareesa Ahmad is a member of the ChopChop Kids Advisory Board.