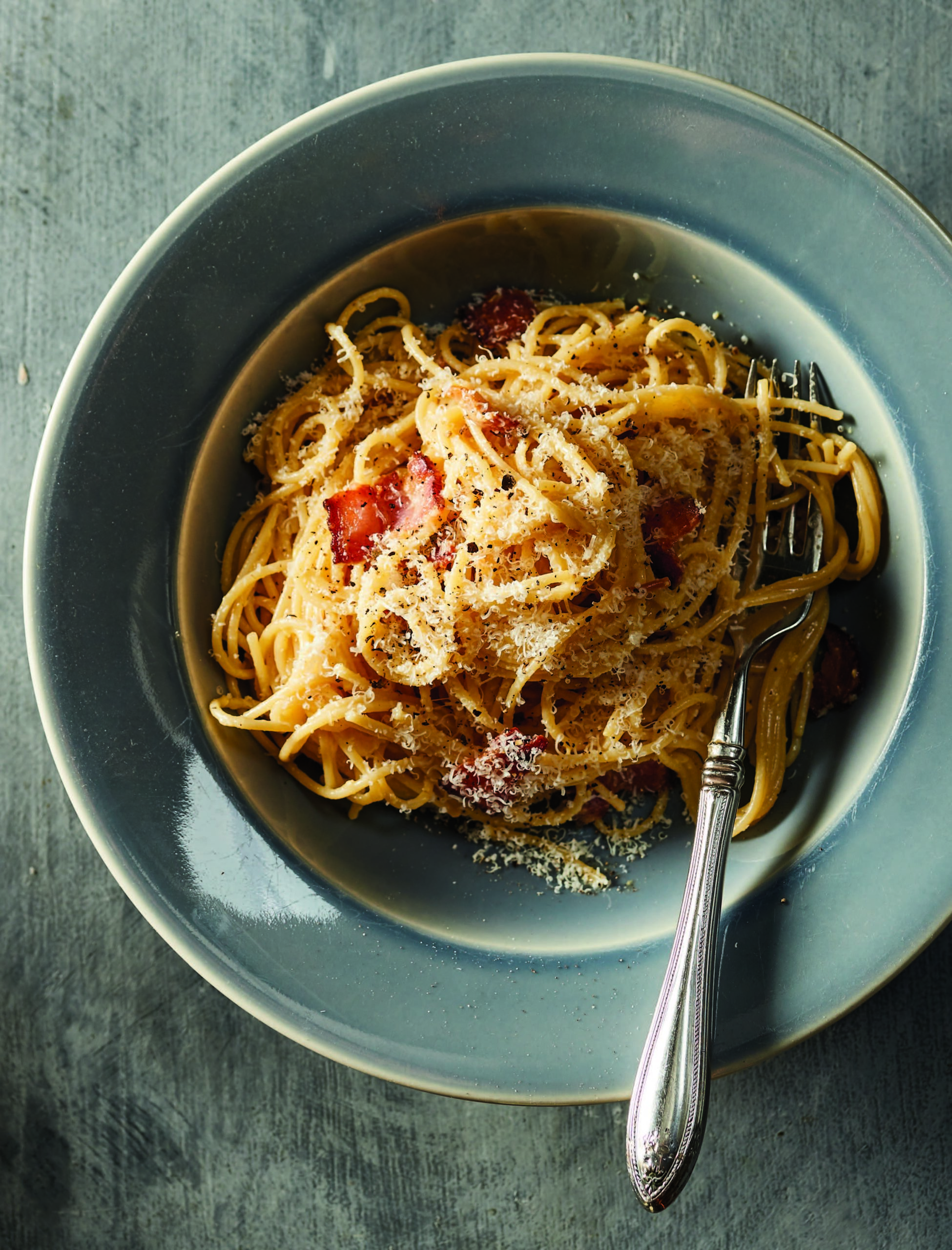 In issue 6, Ruth Reichl, an award-winning writer, editor, and author, shares how she and her son fell in love with pasta alla carbonara on a trip to Italy, and how she was determined to make her own version when she returned home.

Wandering around Rome with my ten-year-old son, I came upon a little trattoria emitting such delicious aromas it simply stopped us in our tracks.

There was no sign and no door, just some glass beads hanging down. We entered to find a whitewashed room with paper-covered tables and a scene that seemed straight out of Fellini. People were crammed into small chairs at tiny tables, gesticulating wildly as they devoured giant plates of food. All around us was the clatter of Roman dialect: strong, emphatic, and opinionated.

A single waiter dashed about, delivering dishes, and when we peeked into the kitchen there was just one cook, moving at the speed of light. Dirty dishes were piling up, obviously to be dealt with at some later time.
The menu was small, but Nick instantly chose pasta alla carbonara, which arrived in seconds, great swirls of spaghetti tossed with golden egg yolks and sprinkled with heaps of cheese. I eyed the plate skeptically, thinking my very picky child would never eat it.

To my surprise he gobbled it up. Then he asked for more.

We went back every day, and I soon learned that the trattoria, Antonio Bassetti, has been feeding Romans for three generations. Reliable and inexpensive, it’s affectionately known as “Da Tonino.”

Back in New York we all missed Tonino’s cooking so much that I worked up an American version of carbonara; the bacon lends it a slightly less rustic profile than the more robust Roman guanciale, and I use Parmesan instead of Pecorino. Still, I never make this wonderfully easy dish without thinking of that day in Rome when we followed our noses into a little trattoria that would become one of our favorite restaurants in the world. This simple but delicious dish can be made from scratch in 25 minutes assuming you have an egg, a clove of garlic, and some bacon, spaghetti, and Parmesan cheese. The secret is to move fast once you drain the spaghetti—you want to combine it with the egg while the pasta is still hot enough to cook the egg. See our carbonara rules and a step-by-step pictorial on page 24.

INSTRUCTIONS:
1. Put a large pot of salted water on the stove and turn the heat to high.

2. Break the egg into a large bowl, grind in some pepper, and beat well with a fork.

3. When the water comes to a boil, add the spaghetti and cook, stirring occasionally, until it’s just al dente (almost cooked through but still has a bit of resistance in the center), 8 to 12 minutes depending on the brand. Start testing at 6 minutes.

4. While the spaghetti is cooking, put a skillet on the stove and turn the heat to medium-high. Add the bacon and cook for 2 minutes, until the fat begins to render. Add the whole garlic clove and cook until the edges of the bacon just begin to get crisp, stirring frequently, about 5 minutes.

5. Remove the garlic from the bacon and pour all but about 1 tablespoon of bacon fat out of the pan.

6. Drain the pasta and immediately add it to the bowl with the beaten egg. Using tongs or two forks, toss fast and thoroughly. Add the bacon and its fat, toss again, then add the cheese and toss one final time. Serve right away.

Ruth Reichl, a writer, editor, and author, is among America’s foremost authorities on food and cooking. She was the restaurant critic and food editor for the Los Angeles Times, restaurant critic for the New York Times, and Editor-in-Chief of Gourmet magazine for 10 years. She has won numerous awards, including six James Beard Awards for her food writing, and has written seven books, including the just-published Save Me the Plums (Random House).