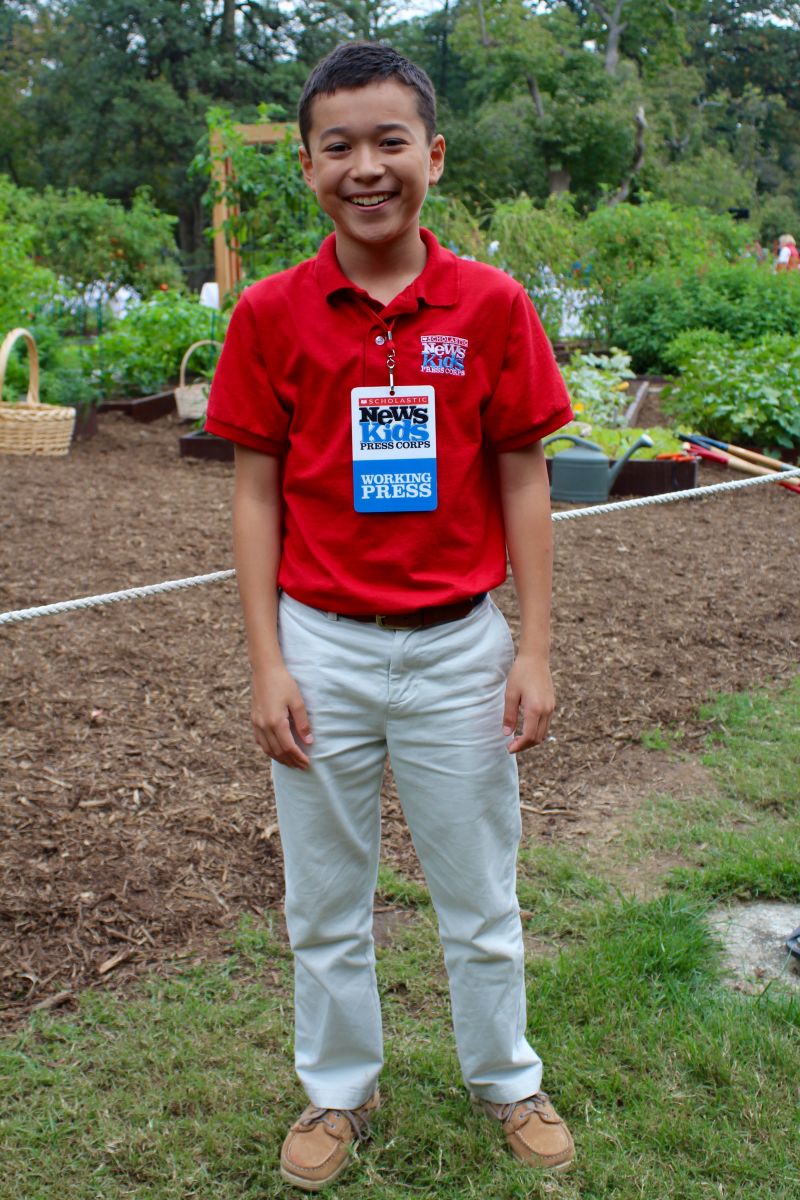 ChopChop Kids Advisory Board member, Maxwell Surprenant, had the opportunity to visit the White House in October 2016 with Scholastic to interview former First Lady Michelle Obama. ChopChop is excited to see our relationship with Mrs. Obama continue through our Kids Advisory Board Members.

In October 2016, as a Kid Reporter in the Scholastic News Kids Press Corps, I met and interviewed former First Lady Michelle Obama at the White House. We gathered in the Map Room, at a round table with a big bowl of apples in the middle. Each Kid Reporter asked a few questions, and Mrs. Obama gave thoughtful answers.

After introducing myself, I asked: What is your best advice for boys and girls who dream of becoming president of the United States?

“If you want to be president,” Mrs. Obama said, “you have to know a lot, and you have to be serious.” The First Lady called her husband, President Barack Obama, “the fact guy” because he knows so much and reads voraciously. Mrs. Obama told a story about how President Obama was as excited as a little boy about a book he was reading because he cares about climate change. “His curiosity is endless,” she said.

Mrs. Obama emphasized the importance of education. “Your education is the most important thing,” she said, “understanding that school is important, finding some excitement in it, and taking it seriously.”

The Scholastic interview focused on Mrs. Obama’s “Let’s Move” campaign and the White House Garden. The former First Lady started the garden in 2009, after the Obamas moved into the White House. “I thought planting a garden would be a good way to start a conversation about where our food comes from,” Mrs. Obama said. “I found that when I got my girls involved in going to farmers markets and things like that, they were more interested in eating the vegetables.”

The Obamas set an example for their daughters and other young people by eating fruits and vegetables from the garden and exercising frequently. “We try to lead by example, and the President and I are very active,” the First Lady said. “We work out almost every single day, we have a trainer, and I do classes—I love SoulCycle. I want my kids to see me moving around!“

Mrs. Obama talked about how her eyes were opened to the problem of childhood obesity when she went to her daughters’ pediatrician appointment before they lived in the White House. In 2010, the First Lady started “Let’s Move” to encourage kids to eat healthy and exercise. Her initiative resulted in healthier school lunches, more accurate food labeling in grocery stores, and more low-calorie meal options in restaurants.

Mrs. Obama emphasized her continuing commitment to the cause. “I hope to always be working on issues of health in this nation,” she said, “particularly with kids, and hopefully with moms as we move forward.”

After the interview, Michelle Obama invited the Scholastic Kid Reporters to join her and a group of elementary students for the final harvest in the White House Garden. President Barack Obama made a surprise appearance and helped in the garden, too. We watched the kids collect berries, tomatoes, and lettuce. The Obamas included the fruits and vegetables in the meals served in the White House, and they also donated food to soup kitchens around Washington D.C.

Michelle Obama said, “This garden has taught us that if we have the courage to plant a seed…we never know what might grow.”