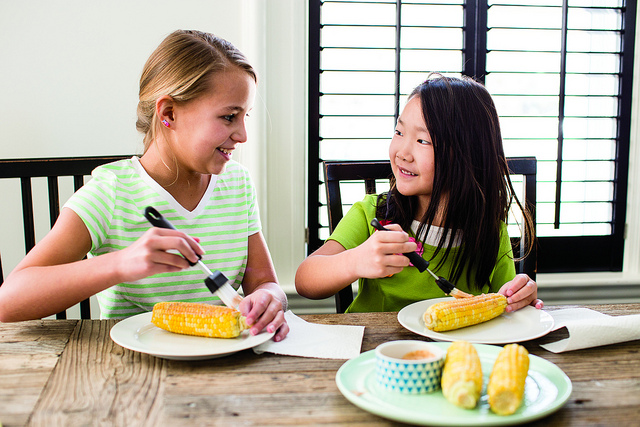 Happy Cinco de Mayo!  We have some easy and delicious Mexican dishes you can make with your family.  Pick your favorites and put them together for a celebratory Cinco de Mayo family dinner.

Elote is the Spanish word for this spicy, lime-laced Mexican street-food favorite. It is often served with a coating of cheese, but in this version, we’re letting more of the corn’s sweetness shine through. Nochebuena means “good night” in Spanish—but in Spain, Cuba, Latin America, and parts of the American Southwest, often it is used to refer to Christmas Eve. The way Nochebuena is celebrated varies, but it usually involves a big family dinner after Midnight Mass. This traditional Mexican salad—sometimes made with cooked beets, apples, pineapple, or banana—is a beautiful and healthy addition to your holiday table.

This is a popular drink in Mexico and some other Latin American countries. The words “agua fresca” mean “fresh water” in Spanish. Guacamole (gwak-ah-MO-lee) is a Mexican dip made from avocados. It’s yummy on just about everything! Serve plain with pita chips, or use as a spread on sandwiches, omelets, burgers, more! There are lots of ingredients to prepare, but this isn’t a hard recipe to make, and the tacos are so good. If you don’t have (or like) all the taco bar fixings, just use what you do! It’s a Mexican grilled cheese sandwich—with tortillas instead of bread.  We like whole-grain or corn tortillas better than white flour tortillas because   they have lots of flavor and more nutrients! (Corn tortillas are smaller:  if you use them here, use 2 per quesadilla, sandwiching the cheese  in the middle between them instead of folding them.)