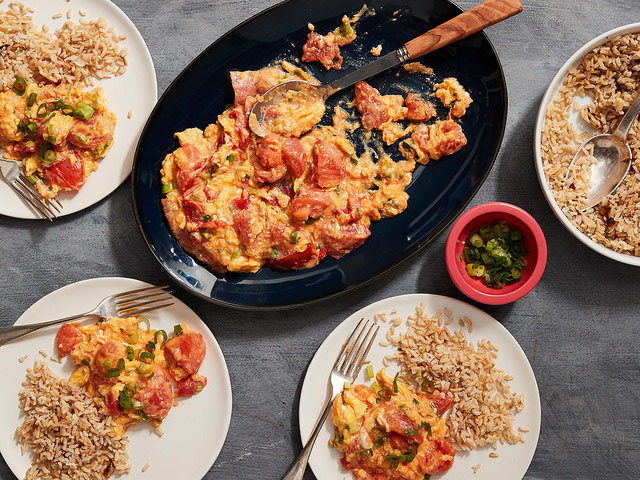 Advice from an Expert: Francis Lam on Stir-Fried Eggs

In issue 5, Francis Lam, an award-winning writer and editor, shares his journey to discovering how to make a meal he grew up eating, but never knew how to cook.

Recently I found myself feeling a sudden, irresistible craving for Chinese Stir-fried Tomatoes and Eggs. I’ve known this dish—savory, sweet-tart tomato sauce folded around soft-scrambled eggs—my entire life. A version of it was my younger brother’s favorite food when we were growing up—and by “favorite food,” I mean it was basically the only thing he would eat for the first eight years of his life. When I worked in Chinatown, it was a staple of every $4 buffet in the neighborhood.

But when my hunger for this dish struck, I realized I had no idea how to make it. I looked in my Chinese cookbooks, but it appeared in exactly none. That is because in Chinese cooking it is the equivalent of a ham sandwich—everyone knows how to throw it together, so there’s no need to write down a recipe. Calling up my mother to ask her, I knew, would be like asking her to describe how to tie shoelaces: almost impossible to articulate, buried so deep in her muscle memory.

I realized that my not knowing how to make this dish was akin to my not knowing when Chinese New Year is every year, or forgetting words in Cantonese. Because I’m not an immigrant but a son of immigrants, I know only the frayed facsimile of the world that my parents grew up in. So if I were to have this recipe, it would have to come to me through my people or not at all.

I knew that I was most likely to find the solutions to this problem on the internet. So I went online and, sure enough, found recipe after recipe, which I tried with an eye toward cobbling together my own. And after all this reading, I started to realize what I was really seeing: people, just like me, missing a knowledge that they felt should be in their bones, coming to someone else’s recipes to connect them to where they came from while staying rooted in where they are. And now I have it, and I want to share it with you. Homestyle Chinese food at its best, this dish is the object of nostalgia for many Chinese immigrants and their children. Well-seasoned eggs are scrambled until just-set and then combined at the last moment with a sweet-tart ginger-tomato sauce. Serve with lots of steamed rice. Adapted from Francis Lam.

INSTRUCTIONS:
1. Put the eggs, rice wine, if using, and salt in a mixing bowl and beat well.
2. Put the cornstarch and water in another small bowl and mix until smooth, then stir in the ketchup.
3. Put a medium-sized skillet over high heat and when it is hot, add 2 tablespoons oil.
4. Add the scallions and cook, stirring, until very aromatic, about 20 seconds. Add the egg mixture and cook, stirring well, until the eggs are just set but still runny, about 45 seconds. Pour the egg mixture back into the mixing bowl and wipe out the skillet.
5. Reheat the skillet over high heat and when it is hot, add the remaining tablespoon of oil. Add the ginger and cook until aromatic, about 15 seconds. Add the tomatoes (including the juice if you’re using canned) and salt to taste; cook, stirring occasionally, until it has thickened to a sauce-like consistency, about 4 minutes.
6. Lower the heat to medium. Give the cornstarch-ketchup mixture a stir in its bowl, then quickly add it to the skillet. Cook, stirring, until the mixture returns to a boil and thickens, about 5 minutes. Taste and adjust the seasoning with salt or more ketchup—you want a savory, tart-sweet sauce.
7. Return the egg mixture to the skillet. Cook, stirring, for a few seconds to finish cooking the eggs and to combine. Serve right away with steamed rice.

Francis Lam, an award-winning writer and editor, is the host of The Splendid Table from American Public Media, the former Eat columnist for the New York Times Magazine, and Editor-at-Large at Clarkson Potter specializing in cookbooks.

For a limited time only, a digital version of issue 5 is available in its entirety, below.