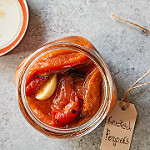 The idea here is to preserve the peppers using a three-pronged approach — salt, vinegar, and oil — that a) makes them taste great and b) allows them to keep for a long time. (They can stay out of the refrigerator for a few hours, for wrapping and gifting.)

Wash your hands with soap and water, then gather all your equipment and ingredients and put them on a counter.