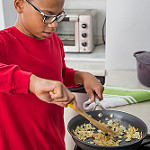 Browning onions is the first step of lots of cooked dishes because browned onions add so much flavor. It takes a little patience to brown onions, but once you master this skill, you will be able to make a lot of tasty recipes. If you’re not making another recipe now, add your practice onions to some eggs or a sandwich.
Print Recipe Pin Recipe
Prep Time 35 mins
Total Time 35 mins
Servings 1 cup

How to safely chop an onion:
Previous post Next post
0
0
Your Cart
Your cart is emptyReturn to Shop
Continue Shopping