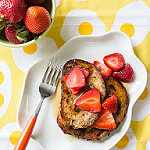 Why does "eggs and toast" sound like dinner, but – even though it has the same ingredients – "French toast" doesn’t? We’re hoping to change that! Try using different kinds of bread but be sure the bread is at least one day old; if it’s too fresh, it won’t absorb the egg mixture.
Print Recipe Pin Recipe
Prep Time 30 mins
Total Time 30 mins
Servings 6 Servings

OR ELSE For a savory version, skip the vanilla, cinnamon, and maple syrup, and serve the French toast with salt, pepper, and a drizzle of olive oil. You can also try adding herbs and/or grated Parmesan to the egg mixture!
Previous post Next post
0
0
Your Cart
Your cart is emptyReturn to Shop
Continue Shopping